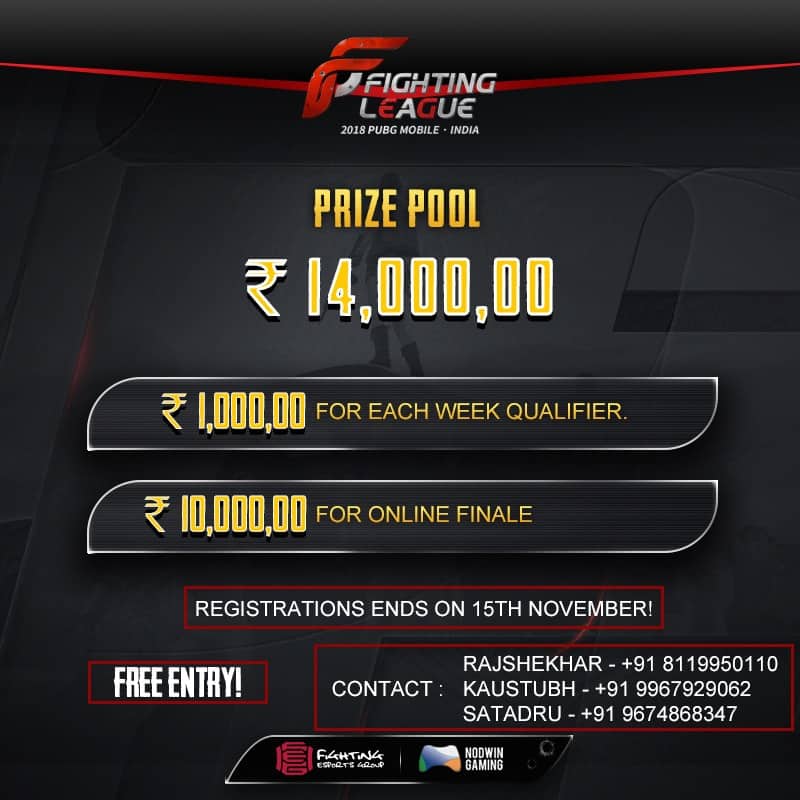 As the eSports scene in India is on a steady rise, new games are joining the competition in an attempt to prove themselves “eSports worthy”. There are many multiplayer eSports ready games that are constantly evolving and are creating space for fair competition. A wildcard addition to the fast-growing Indian eSports scene is PUBG mobile. From a buggy mobile release that caught eyes to a worldwide sensation, PUBG mobile has been a fan favourite throughout its run. And currently with giant event organizers like Nodwin Gaming taking interest in it the future of the game in the eSports scene looks bright.

With the recently held PUBG mobile Campus tournament championship, the game made its official entry to the eSports scene. With further plans in mind, Nodwin Gaming recently announced their official PUBG mobile tournament titled “Fighting League”. A 14 lakh INR prize pool has been arranged for the purpose of this tournament.

Click here to redirect to the registration web page.

The tournament will have 4 weekly qualifiers starting from 15th November and 1 main event/ grand final set between December 8-9. The weekly qualifier prize pool is 1 lakh INR every week over a period of 4 weeks. The total number of participants is limited to 100 teams per week (note that same teams can enroll for multiple qualifiers to score more points to qualify for the main event according to the officials) during the 4-week time period. The top teams from the weekly qualifiers get points and the top 20 teams with the highest points during all the 4 qualifiers are set to clash and prove themselves at the main event finals where the best team wins it all. The prize pool for the finals is set to be 10 lakh INR. The registration process for the first qualifier is open for aspiring gamers who think they have the mettle to be the best.

Join in with your squad and prove yourself worthy in Fighting League if you think you have it in you!

Make sure you subscribe to our push-notifications and never miss an update on PUBG mobile. Until next time, Happy Gaming!