Everything We Know About ‘God of War’

World’s biggest video-game trade fair E3 brought us some of the biggest titles and news this year. We saw incredible and jaw-dropping reveals, trailers, gameplay footage and announcements presented by many developers and publishers respectively. By now, you may have chosen your best conference and the games on your ‘MUST-BUY’ list. For me, the best conference was of Ubisoft and the best game for me was Watch Dogs 2. Why? I’ll tell you why. But maybe some other day.

Sony had a great surprise for us this year. They head-started their conference with the gameplay trailer of God of War which was amazing as heaven! Believe me or not I don’t have a PlayStation 4 but I’ll definitely break a Dualshock in one of the several PS Cafes. Santa Monica Studio, hats off to you guys! 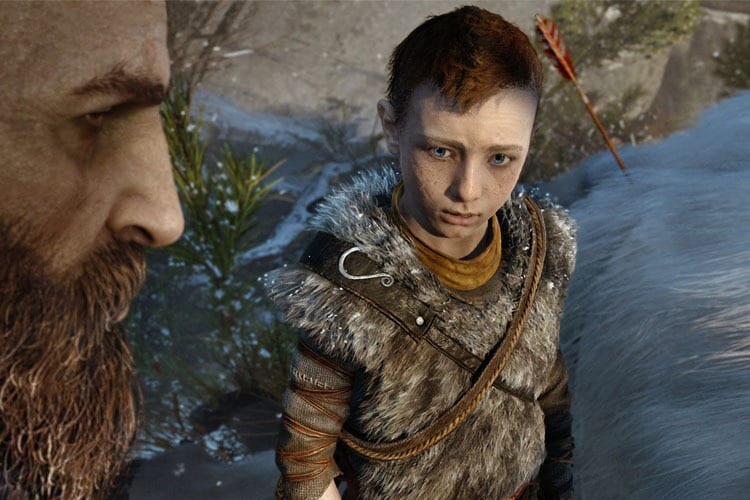 Let me detail you everything that has been shown in the God of War Gameplay Trailer. It goes something like this –

“A boy is being introduced playing with a troll toy and a Norse God toy clashing them and making sounds sitting on the ground outside his residence. Which literally proves the game is slightly based on the Norse mythology and we will see trolls as enemies throughout the game. The boy’s name is Charlie and he’s Kratos’ son, 3/4 human and 1/4 god. Charlie gets called by Kratos from inside their resident and the boy goes in after being called 2 times kicking a sheep-like toy, getting slightly angry on being disturbed during his playtime. Now he’s inside and we hear Kratos’ voice talking to his son saying, “Your mother’s knife. It belongs to you know.” Which means his wife’s no more. And as it’s a reboot of the God of War series, the woman is simply not Lysandra but some other unnamed woman. We’ll know about it later. However, we haven’t seen Kratos’ face yet. He’s in the dark waiting for a cinematic entry. The boy takes hold of the knife and asks, “What for?”. If you may or may not have noticed, the kid has already got many scars and cut-marks on his face. Which can relate to many things. Kratos in reply says, “A test. She taught you to hunt yes?” Charlie with an affirmative response. Kratos continues, “Then show me what you know.” By the end of the short conversation, Kratos comes out of the dark with a cinematic look on his face and music starts to play. “I’m hungry. Feed us”, adds Kratos and throws a boy at the boy. Charlie catches it, takes his quiver and runs out of the house. Kratos follows the kid and guides the kid through the path of teaching how to hunt. While Kratos runs and follows the kid, I observed the types of equipment he’s carrying. He’s carrying a big axe, a blowing horn, a dagger and some pouches. After walking a short distance the boy finds fresh tracks of deer on the ground. ‘Knowledge Gained’ Tracking +25. Suddenly a deer appears in front of Charlie and he shouts ‘Ah!’. He misses the chance. The deer is gigantic though. After going some more distance they find the same deer again. Kratos says the boy to hold but out of excitement the boy fires an arrow and it misses. Kratos yells at him and scolds him. The boy says, “I’m sorry.” To which Kratos replies calmly. “Do not be sorry. Be better.” I kinda liked that dialogue. Kratos says the boy to find it, this time without his bow. Suddenly out of nowhere these strange per-historic zombies come out and haunts the boy. The boy asks for his bow, Kratos denies and says, “No! You’re not ready!” Kratos takes out his axe which charges up with special blue power with slow-mo effect. Then everyone knows what happens. Kratos just slaughters each and every one of them. This is when the symbols appear on the top-left corner of the screen showing which weapon you’re acquiring and your health bar. You can throw your axe as well, punch those knuckleheads and they dissolve into dust once dead. The dialogues of the game are well-written and turn on the heat! Like this one, after Kratos has finished his killing business, they continue moving. Then the boy says, “You know, if you give me my bow back, I can help you fight. I’m ready.” Kratos replies, “You’ve yet to prove that.” Boy – “I need a chance”. Kratos – “You had a chance.” Boy – “I need another.” Kratos – “Then find that deer.” Oh boy! Amazingly hungry Kratos! Now they are about to enter a palace-like thing or maybe a palace-like cave. They are about to go upstairs when crows fly off and Kratos senses the danger. He orders Charlie to get away immediately and breaking the stairs appears a huge troll that takes hold of Kratos and bashes him on the ground. 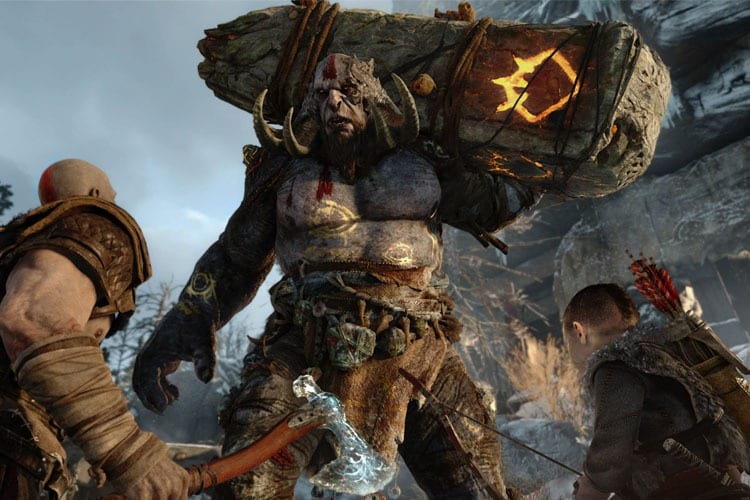 He then speaks some douche language I can’t understand. But I can pretty much guess that he’s saying Kratos “Why do you need that deer? You kill my deer, I kill you.” Something like that, that’s totally fiction. Now Kratos gives Charlie his bow and says, “Here’s your chance. Show me you’re ready.” Boy exclaims, “Yes sir!”. The troll shouts and picks up a totem-like thing and fights with it.

Kratos handles the scene, fights with his axe, charges up, freezes the ground, hits continuously on the left leg of that troll, dropping some health, dodging, throws the axe, bashes the ground and once Kratos takes too much damage, Spartan Rage Available! L3 + R3. Oooh! What goes next is epic! Kratos shouts, “It’s time. I’ll bring it down. You’ll kill it.” Boy replies, “Yes sir!”. And then, SPARTAN RAGE!!! 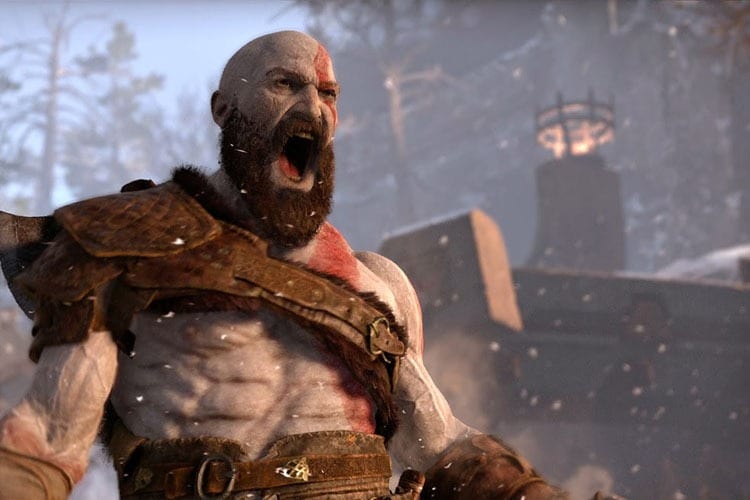 Kratos knocks down that troll’s tusks, breaks its teeth, throws it down and orders his son to fire arrow and kill that troll. The kid fires the arrow but because the troll hit the ground, the arrow went in the wrong direction and pierces through Kratos’ chest. LOL! Epic. Kratos still manages to take out his axe and slaughter down the troll. Kratos’ full of blood. His son comes to him and says, “I’m so sorry. I..” and Kratos stops him and gives an epic reply, “Your deer’s getting away.” What can be more awesome than that? They enter a different place and Dauthamunni Discovered. More conversation. They spot the deer once again. And this time, Kratos guides the boy and you will control the boy now. This time as we, the players are controlling the boy, we can take down that deer easily. EASY PEEZY! “Exhale and Release” and the deer’s down. ‘Knowledge Gained’ Archery +50. The boy hands over the knife to Kratos but Kratos replies, “No. Finish what you started.” The boy can’t do it. So Kratos takes hold of his hands and pierces the knife through the deer. The deer’s dead and we have something to eat! Finally! Kratos takes out the knife and says, “Now you’re ready.” The boy says, “For what.” Kratos – “A New Beginning.” And then a dragon flies over them. The end.

Did you watch the complete video? Did you notice that when Kratos yells at Charlie his Rage Meter starts filling up and slowly lowers? If not, watch it again Here.

What are your views on our EWKA God of War? Did we miss anything? Let us know in the comments below. Keep in touch with Spiel Times for more gaming, technology and esports related information, news and stuff.

All we know about ‘Dear Abby’ – Explained

K-pop: February 2023 Comebacks to watch out for

Uncharted 5 – What we know so far

Chainsaw Man 119 Recap: How Asa and Denji’s complex relationship is ‘bang-ed ‘by Nayuta