It’s time to extend our research of the Playtime Company’s facility to uncover the most horrifying toys in Poppy Playtime. Let’s talk about what they’re like and the things they like to do as you run. Here are all of Poppy Playtime’s voice actors, backstories, and terrifying toys!

The inspiration came from the need to create a toy that acted like a real person. Thus Poppy Playtime doll toy was designed in the 1950s by the Playtime Corporation. After the popularity of other toys like Huggy Wuggy, she was cast aside. Stella Greyber, one of the Playtime Company’s employees, is widely thought to have been the one who brought Poppy to life through experiments executed at the facility.

After we released the doll at the ending of the first chapter, it appears that she is quite thankful. Mommy Long Legs has snared her for some mysterious purpose. Finally, we learn that Poppy is so pleased with our job that she refuses to let us leave the Playtime Company. Poppy then redirects our train to a location known as Playcare, where she hopes we’ll remain to help her solve some of the factory’s riddles. However, everything goes awry and the train crashes. Is Poppy going to be harmed again?

As a result of its popularity, the Playtime Company introduced Huggy Wuggy’s female counterpart a year after it was first introduced in 1984. Huggy Wuggy is said to have been influenced by Coco from Sesame Street, and it doesn’t seem out of the ordinary to us because the two characters are so similar.

At a time when unlawful experiments were taking place in the toy factory, Huggy Wuggy was chosen to be a prototype. Because of an error in the Playtime Co’s systems, Huggy Wuggy was left behind at its facilities until we discover its existence. And well.. you already know the remainder of the story. 😬

Kissy Missy, the pink Huggy Wuggy that appeared on the Poppy Playtime Chapter 2 posters, is the big reveal of the second chapter. In the sequel, she debuts as one of the toys. Kissy Missy’s presence is no coincidence, despite the fact that we know so little about her.

Huggy Wuggy became so successful that the Playtime Company decided to give one of their best-selling toys a feminine counterpart. The final product was a pink Huggy Wuggy that was designed to appeal to women.

We notice her approaching us from the shadows in the game, leading us to believe that Huggy Wuggy is back. However, that is not the case. In Poppy Playtime Chapter 2, Kissy Missy has a kind personality. In fact, she helps you go further in your quest by opening a previously locked door. It appears from the manner in which she goes without saying anything that Kissy Missy may be the first toy since Poppy Playtime that is not violent or out to murder us!

The Mommy Long Legs toy was launched in 1991 and promoted with a special plastic that could be stretched. It was discovered that Mommy Long Legs was a Playtime Co. research participant known as Experiment 1-2-2-2 also known as Marie Payne in one of the Transfer Request files.

It was shown in the paper that Mommy was unfriendly to industrial employees, but caring and compassionate, even protective of other experiment subjects. Mommy Long Legs may be conscious of her history as a human being and how she was changed into a toy, holding animosity and hatred towards the people who converted her and becoming compassionate with the experiments that went through the same procedure as her.

Mother Long Legs has a difficult memory test for us to face. Because of Bunzo Bunny’s looming presence, players who fail to correctly repeat the pattern of colors in this game’s memory test will receive this bunny as punishment. Hanging from her ceiling and playing cymbals, you better be careful not to get snatched!

The quicker it hits the cymbals, the more anxious we can be, and the less effective we will be at performing the right pattern.

There are foes that you may recognize in one of Mommy Long Legs’ gaming challenges: Huggy Buddies. These aren’t the iconic Huggy Wuggy, but they’re just as lethal in a smaller form. When in a mole whacker, but with small Huggy Wuggies, we’ll have to whack them as they emerge out of the holes in the minigame.

These toys, unlike Huggy Wuggy, attack in groups and appear to be less dangerous. Because they don’t appear to have many teeth, the Huggy Buddies’ jumpscare is milder than Huggy Wuggy’s. Despite the fact that they will still murder us.

If you’re terrified of or repulsed by worms, yet adore dogs, you’re not alone. Let’s see how you handle PJ Pug-A-Pillar, a horrifying huge toy that crawls on the ground and is half dog and half worm. It becomes a terror as he gradually goes around the playground. We’re reminded of Squid Game’s red light/green light since we have to stay motionless when the music stops and the light turns on. Let me be clear: If we fail to follow the rules, he won’t hesitate to eat us! In Poppy Playtime Chapter 2, we discover a brand-new toy that is less aggressive but no less lethal than the venerable Huggy Wuggy. Prior to the game’s release, it appears that this character’s appearance was altered from the humanoid worm that first appeared in the game’s teaser.

Poppy Playtime 2 finishes with a mechanical hand that drags away Mommy Long Legs’ remnants at the conclusion of the game. Many say that this hand is the Playtime Company’s most intellectual creation, experiment 1006, which is why it doesn’t appear to be welcoming at all.

There’s a chance this is the game’s ultimate boss, and if so, he’ll be hunting for the pieces of the final toys we’ve destroyed in the hopes of assembling a monstrous giant toy from them. If this idea holds true, then the hand has also removed Huggy Wuggy’s remains when he fell over the fence in Chapter 1.

Boogie Bot, considering his moniker, is presumably an enthusiastic dancer or music lover. If music plays in the background nearby, it’s probable that Boogie Bot may get up and dance with the kids. In order to capture his audience’s attention, he was designed to have both fun and delicate characteristics. 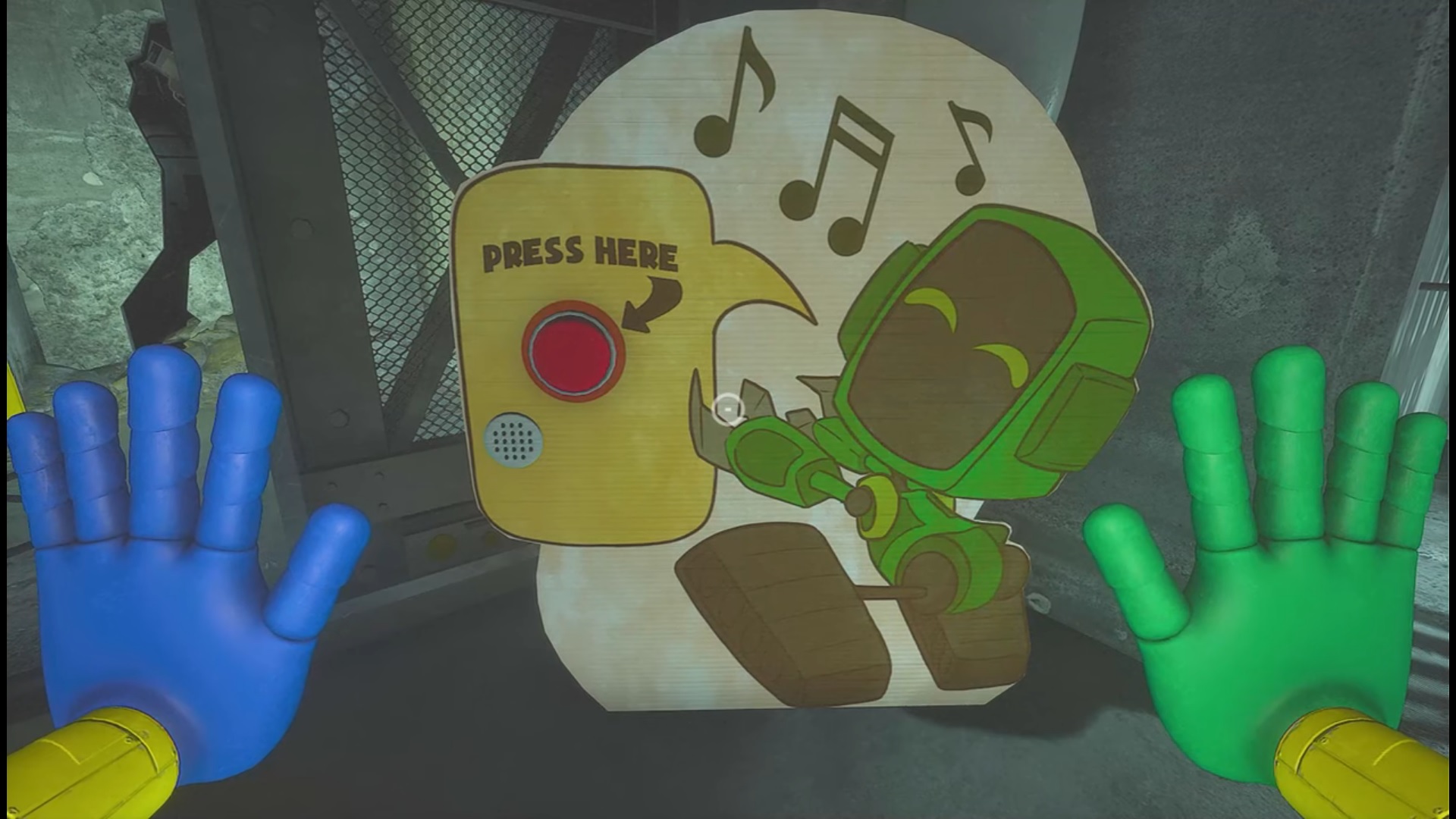 Boogie Bot appears only on posters, however many unpowered Boogie Bots, several in blood-soaked pieces, are discovered scattered about the factory.

Few details are revealed about Bron. However, he is referred to as hard-working and dedicated. He is also tightly restricted to his daily caloric intake of 4,000 calories. Bron’s voice cutout shows that he also enjoys dinosaur jokes. In 1961, Playtime Co. launched Bron, a follow-up to Poppy Playtime, which had been around for a few years at the time. Playtime Co. may have also used Bron as an experiment in making their toys brought to life.

Makayla Hyssop, an orphan, is mentioned twice on the Chapter 2 map in passing as a participant in research involving Candy Cat. These letters prove that the toys are, in fact, human people who have been transformed into monsters for no obvious justification. It was in 1979 that Playtime Co. invented Candy Cat. The company created her with the sole purpose of feeding her sugary treats. Her exact purpose in the game is still a mystery, although that might alter in the coming chapters.

In Chapter 1: A Tight Squeeze of Poppy Playtime, the game introduced Cat-Bee, a toy made by the company. She was produced in the late 1980s and the early 1990s. You’ll need a MAF machine to produce a Cat-Bee toy, and then scan it to open an exit door in the chamber.