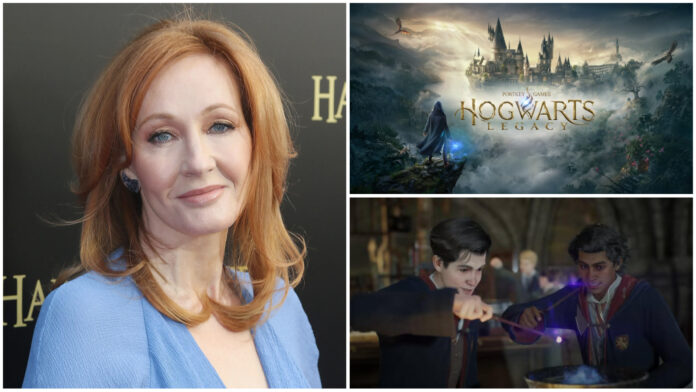 The beauty of works involving J.K. Rowling is such that many throughout the world have dived themselves into the world she created. Yet in what turned out to be pop culture’s one of biggest call-outs, J.K. Rowling has been condemned for her transphobic remarks. Things turned quite political once again when a subreddit erupted. As the moderators of the said subreddit reminded people of the Hogwarts Legacy transphobia controversy legacy of its author.

The subreddit where the Hogwarts Legacy Transphobia Controversy erupted

One fine day, the famous (infamous) politically-left subreddit r/GamingCircleJerk erupted when moderator GrizzlyPeak72 reminded the subreddit netizens of the Harry Potter author’s transphobic past (or rather, present). The moderator posted a photo in which J.K. Rowling could be seen holding a copy of the Hogwarts Legacy game.

The guilt tripping and the ‘TERF’

The intention was thus to remind everyone of the bloodied hands of the author who was holding the game copy. Another intention was to guilt-trip the players into knowing that the game they were so depravingly enjoying, was the product of a TERF person.

TERF stands for Transpeople Exclusionary Radical Feminists. In simple, it refers to a version of radical feminism that advocates women with the exclusion of trans people. Although the LGBTQ+ and Feminists seem to be close neighbors, the TERF? not so much on the political spectrum.

“Anyone who pledges to support her monetarily is also a transphobe”

said the concerned moderator. What erupted (again) was the onslaught of over 4,000 comments fighting against and for each other.

Why Hogwarts Legacy Transphobia Controversy is just a lovechild of the J.K. Rowling controversy

The moderator feels that Rowling is a TERF. An abbreviation to describe those who radically believe in the better nonexistence of trans people. And an inclusivity that limits itself only to the female section of ‘feminism.

Many debates can be seen floating in that particular subreddit. You can see even more on Twitter. Anything born out of that treacherous TERF is equivalent to the TERF itself. Meaning, every creation and everything inspired by that creation of hers, is doomed to be canceled or called out.

But some heroes took to Twitter to reiterate that no, this isn’t it. People deserve to enjoy the greatest fantastical reality of magic from their childhood. And do this without having to infer a Hogwarts Legacy Transphobia Controversy along with it.

Make sure you also share subscribe to our push notifications and never miss an update from the world of video games, cinema, and sports. You can follow us on Twitter @spieltimes for the latest PS5 restock and drop. Stay Safe and Happy Gaming! One Punch Man Chapter 178: Saitama vs Tatsumaki: Is it happening?